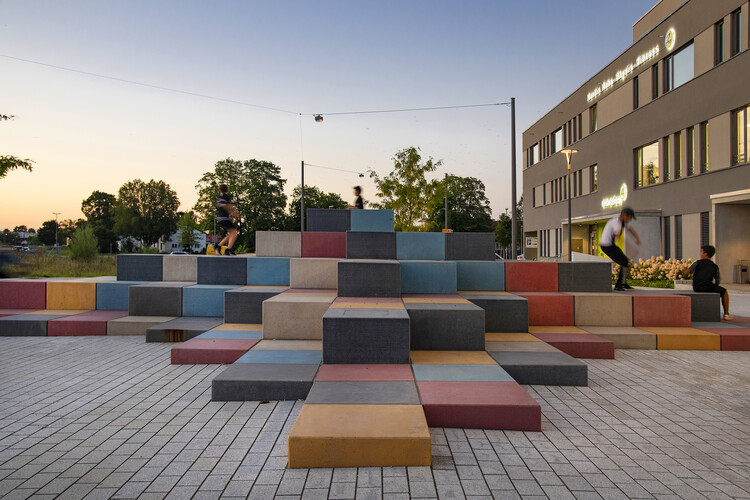 Text description provided by the architects. The focal point of a new neighborhood square in Augsburg is dominated by this vast star-shaped seating and lounge sculpture made of 165 solid-colored concrete cubes, 22 cubes fitted with light-conducting fibers.

It is located in the middle of former anti-aircraft barracks located northwest of the city of Augsburg. The barracks were built in 1939 and used until 1945. They then passed to the United States armed forces and continued to serve military purposes until 1994. Finally, the Augsburger Gesellschaft für Stadtentwicklung (AGS) acquired the former barracks area. As part of an urban development project, he is gradually converting the spaces available for public use. In this context, a new district of the city of Augsburg with residential and commercial buildings was created in the urban development area Kobelcenter-Süd.

The “Urban Star” represents a vestibule at the main access point to the new Kobelcenter-Süd district and serves as a link between the barracks area and the urban space. It is a place of meeting and rest. A small urban center is created here through the development of commercial buildings with a medical center, cafe and shops. The square square of “l’Etoile Urbaine” is an urban neighborhood square in the public space. A light gray natural stone paving forms the surface of the square.

Together with the concrete cubes, the paving creates a uniform joint pattern. The center of the square is formed by a vast star-shaped sculpture of seats and lounges made of colored concrete blocks. 165 cubes are in concrete colored in the mass with pigments, 22 in translucent concrete with colored LED interior lighting. In daylight, the colored concrete cubes dominate the appearance of the sculpture.

As night falls, the colored concrete cubes gradually lose their effect and the translucent concrete cubes begin to glow. The blocky structure of the cubes and the neon color of the concrete surfaces make a formal reference to American downtowns in the western United States.